The notion of ruins pervades the body of work exhibited in Anders Johnson's Polymer Relic. Ruins typically perform a symbolic function: they are monuments to formerly grand civilizations that have since been destroyed; a kind of memento mori for the built environment by way of taking away the built environment's use value. They provide a tension: schadenfreude at the expense of the societies of the past while insinuating a cautionary tale against suffering the same fate. These kinds of narratives are delivered by the kind of ruins locked away behind security fences or the security of the picture plane. They are only to be looked at because they are determined to be too dangerous to enter. On the other hand, there is another kind of ruin that isn’t as fussed over and people are free to roam inside climb on top of them. This kind of ruin is still recognized as historically significant, but not so historically significant that children can't play on them (the children of tourists, in particular). Instead of being merely symbolic these ruins perform a certain practical function. Although the original use of the built environment is gone, another use remains.

Johnson’s spaces are filled with ruin and disarray, yet are a careful assemblage of cultural, historical, political, geographic, and personal references. From Goya to intermodal freight containers to news media, the individual subjects span continents and historical vectors. While cosmopolitan in scope, the aggregation of individual global references construct spatial reactions to specific moments in contemporary American culture. Johnson’s ruins then describe spaces that are either landfills of global media and art history, or more likely were designed with big, specific ambitions in mind but have been left abandoned and unfulfilled. But priceless artifacts, materials, textures, courtyards are more have been left around, free for the taking. Nobody has been in charge for some time, yet they remain imminently inhabitable and inviting. How can such a mess still feel rich? How does one paradoxically make ruins luxurious? How does one take a boutique approach to decay and disarray?

Instead of an apocalyptic conclusion, Johnson’s paintings provide space to play in. As American ruins made of global ephemera they perform the symbolic function of ruins while offering a practical function as well. We get to play around in them as built environments. As a painter Johnson climbs around the broken clutter of globalization against a contemporary American political climate where its exceedingly easy to run into small compressed corners of cynicism or even despair. As a reaction to individual American crises, Johnson converts political dead-ends into inhabitable spaces, albeit messy ones. 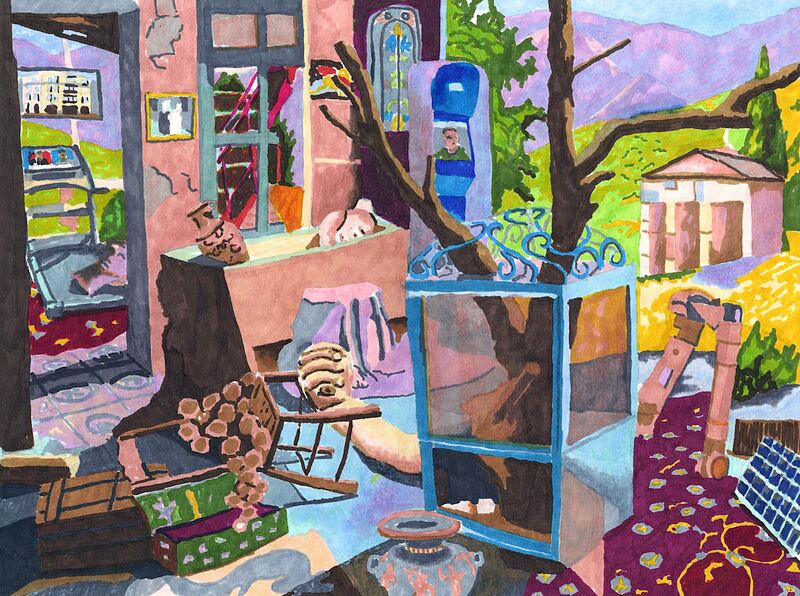